Annacurra – One of the oldest clubs in Wicklow!

Annacurra can be considered the very first superpowers of Wicklow Gaa and have featured in several key games in Wicklow’s history. The club first practiced in Caufield’s field at the cross roads and later played their games at Blake’s field in Kilpipe. Avondale provided the opposition in Annacurra’s first ever match and the result went in Annacurra’s favour. Annacurra won two and a half of the first three championships in Wicklow from 1886 to 1888. In 1887 they reached the final with Clara. As was the tradition at the time the winners of the county championships represented the county in the All-Ireland series. The Wicklow final was not finished on time (As was to become a recurring trend in Wicklow GAA) and as Annacurra were overwhelming favourites to win, they represented Wicklow.

Annacurra played the Wexford champions in the 1888 Leinster in what was a game that would go down in folklore. The game was level at half time and Annacurra opened up a two point lead entering the final minutes of the game. A heavy tackle between two players brought a crowd onto the pitch and the game had to be abandoned. A month later, a replay was fixed for Clonskeagh in Dublin and Annacurra were defeated after extra time on a score line of 1-2 to 1-1. The county final was never played and the title was shared. Another title was added in 1892 and it was Rathnew who finished the century as the dominant force. In 1913 Annacurra were back at the winner’s enclosure. This win was considered one of our greatest ever wins. Rathnew were the reigning champions and the real force in Wicklow football. Annacurra won the game 1-4 to 1-3 and defeated a team that was considered unbeatable at the time.

Heartaches occurred in the next few years. In 1916, Annacurra met Carnew in the final and drew. A replay was set but Annacurra could not travel. The Championship was  awarded to Carnew as a result. In 1918, Annacurra and Tinahely met in the final with Tinahely winning narrowly. Several objections were lodged and both teams were deemed illegal and the result was deemed null and void. Two years later, Annacurra finally got it right on the big day. This year, they defeated Rathnew on a score of 1-1 to 0-1. In 1926 Kilcoole won the title but were deemed to have played an ineligible player. They easily defeated Annacurra in the final but were stripped if the title and it was awarded to Annacurra.

In 1928 Annacurra were relegated to junior level but their stay was short-lived as they defeated Donard by a goal and won the Junior Championship. In 1930, Rathdangan bet us in the semi final but in 1931, Annacurra captured their last senior title. They defeated Hollywood 2-2 to 1-1 but an objection was lodged which seemed to becoming a common occurrence with our club. The replay did not bother Annacurra who defeated Hollywood by a point in the replay and the Miley cup as it is known now was back by the Derry River. In 1932 Rathnew defeated Annacurra in the final and this would be the last time Annacurra would contest a senior final until 1955. 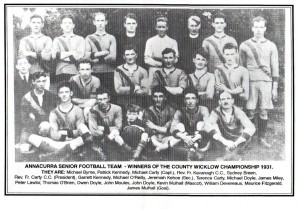 A new generation of footballers had taken over in the 1940’s and another junior final was won in 1944. Annacurra were still a strong team in the 1950’s and were victorious in the 1953 Intermediate final when they defeated Baltinglass by two points to one. The team on the day: D.Kavanagh, J.Kavanagh, M.Doyle, S.Doyle (0-1 free), T.O’Neill, M. Hedderman, E.Doyle, T.Doyle, B.Moules, M.Toole, M.Kavanagh, T.Nolan, Fitz Moules (0-1) & A.O’Neill.

They settled well into senior ranks and in 1955 they contested the final against an extremely strong St.Pat’s team. St. Pat’s would be an extremely powerful team for the remainder of the decade. 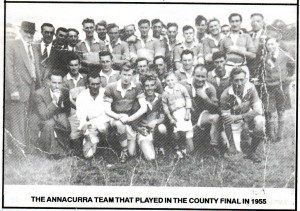 Annacurra produced a minor winning county team in 1963. This team would produce the backbone to a team that in 1967 would capture a Junior title against old rivals Rathnew. It was on this day that Tom Carr scored the famous kick from 80 yards out.

After a split with the Aughrim club in the 80’s, Annacurra emerged as strong contenders to the Senior crown.  In 1988 they won the Senior B Championship for the Keating Trophy and in the same year won the South East League.  In 1990 the Senior team faced All-Ireland Club champions Baltinglass in Aughrim. Unfortunately, again the result on this day did not go to plan. On the same day the newly established Junior B team contest the final with Bray Emmetts. This day saw a small club contest two finals and unfortunately we were defeated in both

The following year saw a switch as hurling became the main sport in the village. The team was set up in 1991 and success was immediate. The team captured the Intermediate title after a John Horan goal helped them defeat Carnew in the final. Later on in the year the club defeated Aughrim in the Division 2 league final and captured the double in their first year back playing hurling. 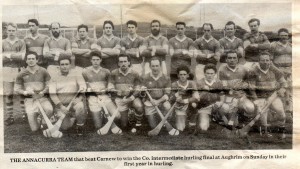 1999 saw Annacurra back capturing a Junior C title with several current players figuring heavily on that team.  Knockananna were the opposition and an early goal gave Annacurra a lead they never surrendered. 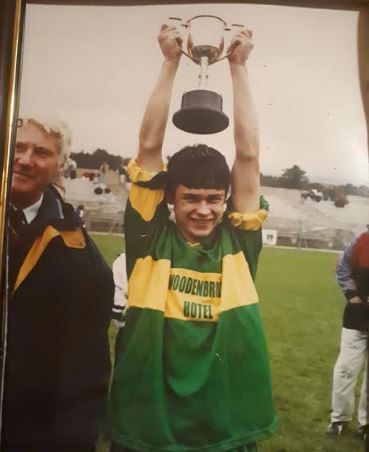 From 2001 to 2004 saw four final heartaches for Annacurra. Defeats to Ashford in 2001 was a match where we either won to go senior or lose and get relegated to Junior A. Ashford were by far the stronger team on the day and were victorious. Our stay in Junior A lasted only a year as we were promoted in the league. Unfortunately, Blessington defeated us by a point in the championship final that year. The following year saw three epic battles with Newtown in the championship final. Leading by five points in the second replay, a controversial penalty decision allowed Newtown back into the game and they won by a point in extra time. This game was particularly remembered for the efforts of Clive Horan who scored an incredible 2-9. Also during this incredible run to the final and also for the first replay, Annacurra goalkeeper Michael Doyle did not concede a single goal.

2004 saw Avondale defeat us in a final that Annacurra were massive favourites for. An early goal gave Avondale a lead they never relinquished.  Annacurra would be promoted to senior on their league performances.

In 2005 Annacurra recaptured the Junior C title and maintained an incredible club record of competing in five finals in five years. They were drawn to play Barndarrig who were the more fancied team. Annacurra battled to earn themselves a draw and a replay. After extra time in the replay, Annacurra emerged victorious by a single point.

2008 saw Annacurra contesting another Intermediate final. This time Carnew were the opposition. Annacurra led by two points as the game entered injury time but a late strike from a Carnew substitute snatched the title from our hands. At the end of the year Annacurra contested the Division 2 final against Coolkenno. This time the tables were turned as a late goal from John Thompson earned Annacurra a draw and forced extra time. Annacurra overpowered their opponents in extra time and were crowned league champions and promoted to division 1.

2010 finally brought the elusive county title to the current crop of players. The majority of the team had contested finals throughout the decade but could never cross the finishing line. Their perseverance finally paid off. Carnew man, Robert Doyle (who managed Carnew to beat us in the 2008 final) took over the managerial reigns and Annacurra came through the Championship group unscathed. They defeated a recently relegated Shillelagh side in the semi final with six points to spare. The final would see a pairing with Eire Og, Greystones who were developing a young team that included two of the Wicklow starting XV. After a blistering start with the wind, a four point lead was opened up but Eire Og clawed their way back into it and trailed by one at the break. The second half again seen Annacurra open up a two point lead. Despite Eire Og reducing the deficit to the minimum, some stellar defending kept them out and Annacurra had finally captured the Intermediate Championship on a scoreline of 0-8 to 0-7. Team: S.Doyle, Martin O’Brien, C.Byrne, L,Moules, W.Codd, P.O’Brien, P.McDonald, A.Horan, A.Byrne (Capt), Mick O’Brien (0-1), F.Clune (0-4), P.Moules, C.Horan, I.McDonald (0-2), S.O’Keefe (0-1). The rest of the panel included M.Doyle, S.McAllister, D.Thompson, J.Thompson, J.Fitzgerald, P.Clancy, S.O’Neill, M.Healy and S.Murphy. The management team was completed by Tom Doyle and John Horan. 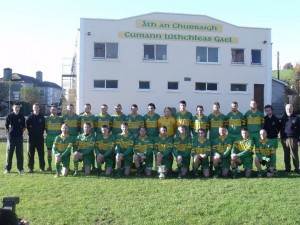 While concentrating on the championship in 2010, the club’s league form dipped and unfortunately lost their Division 1 status. Their stay in Division 2 was short-lived however, as a year where the only defeat was to Eire Og, the club topped the league and gained promotion back to Division 1. 2011 also saw the club reach the quarter finals of the Senior Championship in the first year back on the top rung of Wicklow football. Since this, we have made the quarter finals on numerous occasions and were pipped by St.Pat’s in 2015 in the semi final by two points after a bright start. 2016 seen us reach the Keating Trophy final but we were defeated but in 2017, the club bounced back and although nearly pipping Rathnew to a county quarter final berth, we returned to the Keating Tophy and defeated Bray Emmetts in the final on a scoreline of 1-16 to 3-7 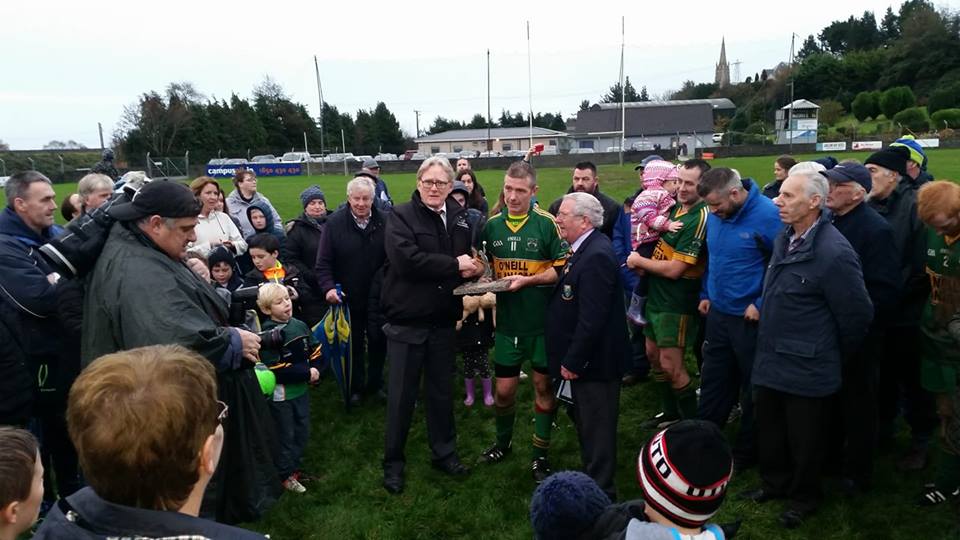